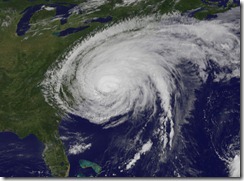 My wife Judy and I have been married 25 years this August (2011). Our Silver Anniversary! While planning how we might celebrate, we both decided a cruise would be the thing to do. We’ve never been on one, although we have a number of family and friends who have. They rave about it. So we took the plunge and scheduled a cruise with Carnival. Nothing overly glamorous—leave from New York City and cruise to the Canadian Maritimes. Make a stop at St. John, New Brunswick, and a second stop at Halifax, Nova Scotia. With a day or so spent getting there and another day back, the entire trip would take five days in total. We would get to see some of Canada, gorge ourselves on delicious food and watch live shows and listen to live music along the way. Perfect! Or so I thought.

As the date of departure drew close—August 27—Hurricane Irene also drew close. The media certainly overhyped the hurricane as the “storm of our lifetime” for the northeastern coast of the U.S. I compulsively checked the Carnival site throughout the week before the appointed day. Nothing listed—no delays, no cancellations—nothing about our cruise until two days prior when it became clear the itinerary would change. We’ll stop at Halifax first, then St. John, because Hurricane Irene would come very close to, if not hit, St. John. “No problem,” I thought. “Carnival must have meteorologists on staff who will know how this is going to play out.” Denial is a very strong emotion.

The day before we set sail, on Friday, August 26, we received a notice from Carnival that we should arrive early at the cruise terminal in New York—they moved up the departure time from 5 pm to 3 pm. So it was clear the cruise would actually take place. I wasn’t too worried, but I kept thinking, “That storm is 500 miles across, and the swirling bands are already reaching up to New Jersey and perhaps even off the coast of New York.” But denial is a strong emotion. No way were we going to forfeit the money we paid and not turn up! If Carnival canceled, we could get a refund. Otherwise, we would be out the money if we didn’t go. In retrospect, I would have gladly given up that money.

Saturday arrived and we left for New York, a three and a half hour journey from our home in the Binghamton, NY area. I won’t bore you with details of arriving and embarking—it’s a lot like boarding a large jetliner with long lines and security checkpoints. Once we were on the ship and in our room, we were so excited! The room, on deck 8, was large and well appointed. We had our very own balcony, something I paid quite a bit extra for.

We snapped pictures from the balcony of our room, looking right up some of the streets of midtown Manhattan as we waited to leave. As I snapped those pictures and gazed at Manhattan, I couldn’t help but notice the gray clouds hovering across the city, obscuring some of top floors of the tallest buildings. A light rain had started to fall. But denial is a strong emotion. What I was looking at, and frankly could not accept, was the beginning effects of Irene—right there in New York before we had even left port.

The ship finally departed around 3:20 pm and we cruised gently down the Hudson River, past spectacular views of buildings. I love New York and seeing it from the river is one of the best ways to see it. We floated past the Statue of Liberty. And then we were called to our posts for a mandatory safety lecture—so we would know how to use our life preservers and which life raft to hop aboard should it become necessary.

END_OF_DOCUMENT_TOKEN_TO_BE_REPLACED

Below is the text of my eulogy given yesterday at the memorial service for William Andrew (Bill) Woishnis. It was nice to meet Bill’s extended family and hear about his early years. And it was also nice to hear from Bill’s friends outside of work, and for me personally to reconnect with my former colleagues from William Andrew Publishing and Knovel. Bill touched so very many lives. His goodness is something that will live on in the hearts of those of us who knew him.
END_OF_DOCUMENT_TOKEN_TO_BE_REPLACED

It is with a heavy heart that I post the obituary of my friend and former boss, Bill Woishnis. I worked for Bill from 2000 until I left Knovel Corporation at the end of 2006. Even though I had moved on to another position, Bill and I stayed in contact. A sage friend once told me, “You know who your true friends are if they stay in contact with you after you leave a job.” Bill and I, along with several other friends from William Andrew Publishing/Knovel have stayed in touch since 2006, regularly getting together for lunch. Invariably when we did, Bill picked up the tab. He was that kind of guy. He was someone whom I called a friend–a good friend. He truly, deeply and genuinely loved people–everyone he met. I will miss him sorely. I now have a hole in my heart that was once filled by Bill Woishnis. Please keep his wife Jeri and son Aidan in your thoughts and prayers during these difficult times.

Below is his obituary. Rest in peace my friend.
END_OF_DOCUMENT_TOKEN_TO_BE_REPLACED